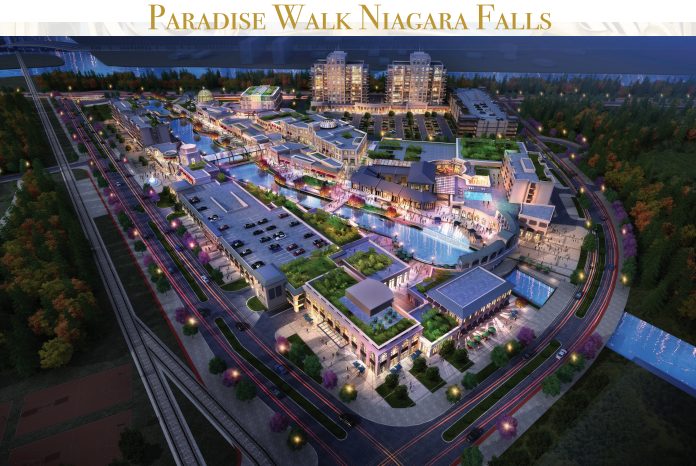 Chinese developer GR Investment Group unveiled a project at the ICSC Conference in Toronto this month that is unlike anything in Canada to date. Called ‘Paradise Walk’, the commercial centre is more akin to projects in Europe and the United States, according to the company, with an aim to attract more locals as well as the millions of tourists that visit the area annually.

Paradise Walk is part of a larger 484-acre mixed-use community called ‘Riverfront Community at Niagara Falls’, which will include homes as well as more than 200 acres of nature preserve.

Helen Chang, Chairwoman of the board of GR (Canada) Investment Co. Ltd., is spearheading the project which will include international restaurants, a boutique hotel, hotel condos, and even a wedding facility. The site, she said through an interpreter, is the ‘best natural oxygen bar in the world’ health wise — its combination of high negative ion content and optimal humidity could, according to WTO reports, strengthen one’s immune system to ward off illness merely by being there.

Plans show a European architecture-inspired experience-based commercial area featuring a series of outdoor pedestrian streets with zones dedicated to different tenant types. Included will be several attractive public spaces with central areas that will house attractions such as street performers and a rideable carousel. About 50% of the commercial mix will be for food and beverage offerings (including restaurants, bars and coffee shops catering to different tastes from all over the world), reflecting a similar mix seen in commercial centres in major markets globally. Food and beverage will drive traffic while offering visitors an expansive array of global-inspired dining options to keep them there for a while.

The remainder of the proposed 100+ unit commercial centre mix would include about 15% dedicated to leisure (such as spas and art galleries), 15% to fashion boutiques, and the remaining 15-20% being for amenities such as grocery, flower shops and other day-to-day commercial venues.

Ms. Chang explained that she is an executive member of the council of global leisure industry as well as the China Tourism Association, and she has been involved with leisure industry development and research for decades. When the prospect of developing a site near the stunning waterfalls at Niagara Falls presented, she jumped on the opportunity to add an attraction in an area that lacked leisure tourism-related offerings for visitors to stay in the area for an extended period. She immigrated to Canada in 2011 and with her vast experience, she set out to build the 330,000 square foot Paradise Walk – a substantial investment in the area that will be positioned as an attraction unto itself with a goal to align it with the natural wonder that is Niagara Falls.

According to Ms. Chang, the aim of Paradise Walk will be to cater to overnight visitors, develop the local economy, and improve the image of local tourism. She said that it is her social responsibility to do so, given her background and the unique opportunity. According to a CBRE report, it is estimated that the Paradise Walk will attract at least 25% of the region’s estimated 14.5-million annual tourists. At the moment, the average stay for visitors in the area is 1.5 days and Paradise Walk’s goal is to extend that to 2-3 days.

As part of the Paradise Walk proposal, a children’s science amusement park will become an attraction for youngsters as well, rounding out Paradise Walk as a family-friendly destination.

A stunning domed wedding facility will be an attraction for visitors looking to get married, overlooking a manicured rose garden as well as a water feature that will span through the property. An expanse of commercial spaces aimed towards restaurants, bars and related businesses will line the canal with outdoor patio opportunities, many of which will be south-facing for year-round sunlight. A beer hall in the plans will also face towards the new waterfront.

The commercial mix will be international, with one section specifically dedicated to tea merchants. It’s the one area of the centre that will be the most ‘Asian and European themed’, according to Ms. Chang, with a central Chinese tea garden framed by several international tea-themed businesses. It’s part of an effort to make Paradise Walk more ’experiential’ in order to attract and retain guests.

About 3,400 on-site residences, including condominium units as well as bungalows geared to seniors, will add a permanent population that will have access to an on-site grocery store as well as other commercial offerings, in an effort to create a mixed-use community that in itself will be self-sufficient.

The goal of Paradise Walk is to be accessible to the general population and as such, it will not be positioned as a luxury centre — rather, it will include a democratic offering in an upscale and attractive-looking environment.

The project will be an economic generator, creating an estimated 3,000 permanent jobs and 10,000 indirect jobs for the region.

Access will be key, and Paradise Walk will be innovative. Existing roadways will provide vehicle access to the site which will have about 2,400 on-site parking spaces available, and shuttle-bus transportation offerings are also in the works. An eco-friendly commuter train, using an existing under-utilized rail line, will transport visitors and residents from the city of Niagara Falls directly to Paradise Walk. This could become an attraction unto itself and achieve a lower carbon emission and reduction of environment pollution, according to the developer.

Ms. Chang is a veteran in the leisure tourism industry with more than 30 years of experience in designing leisure-based experience centres in conjunction with CBRE commercial consulting in China. Since the year 2001, she has also carefully studied and visited about 60 leading mixed-use pedestrian-friendly commercial destinations globally to see what works best. She explained that she wanted to create a ‘man-made wonder’ for the world to correspond with the natural wonder that is Niagara Falls, going on to say that she has worked on similar successful projects in China and she is confident that her Paradise Walk project in Niagara Falls will also be successful.

GR Investment Group is seeking retailers interested in being part of the Paradise Walk project and is offering retail spaces ranging from as small as 280 square feet for a food vendor to over 25,000 square feet for the proposed grocery tenant. She said that the grocer might ideally be an organic chain that would keep in line with the overall theme of ‘health’ that will be present throughout the centre. In all, the 484-acre site (which will include some preserved forest area as well as adjacent residential development) will include a commercial area of 500,000 square feet with a leasable area of about 280,000 square feet and a boutique hotel measuring about 50,000 square feet. The anticipated opening date is in the fall of 2022, though GR says that it will do its best to break ground earlier in partnership with the city with a targeted grand opening in the fall of 2021.